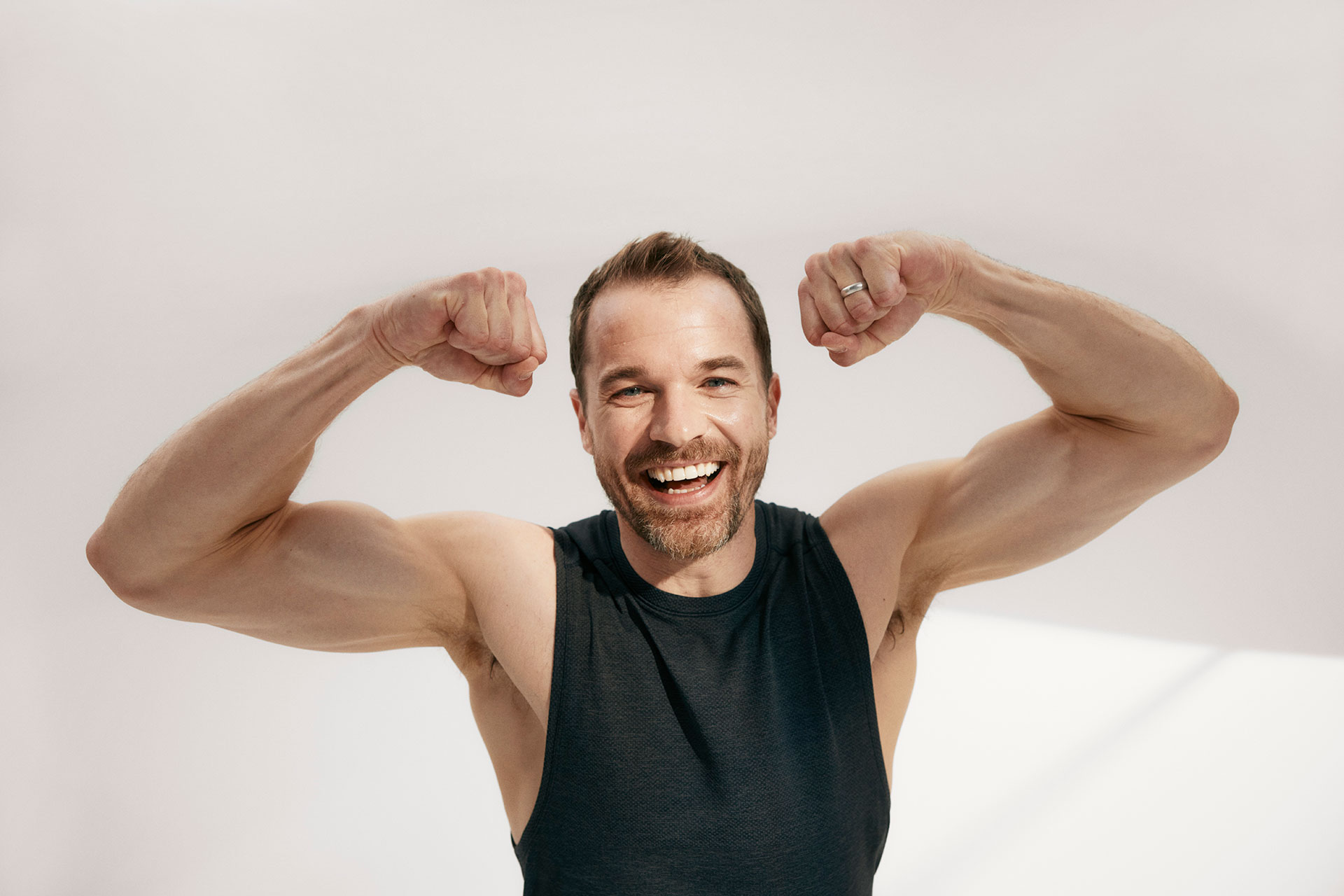 Chris Ryan is a lululemon Studio trainer leading classes in strength, cardio, and stretch. But there's more to Chris than what you see in the Mirror. Learn about his time as reality TV star, a Woodstock '99 employee, and a unique connection with Arnold Schwarzenegger.

1. My full name is Christopher Conan Ryan. My dad was a huge Arnold Schwarzenegger fan and named me after Conan The Barbarian.

2. Both my parents were into fitness when I was young, which was unusual back in the 80s. They both worked out with weights and my mom was even into heavy deadlifts and squats. I doubt I would be as disciplined as I am if I didn’t have two parents who not only raised two rambunctious boys, but also found time for their own workouts.

3. My earliest fitness-related memory is competing against my brother in pull-up contests in our basement. I was five at the time.

4. I was recruited by a number of Division 1 schools including Texas, Indiana, Stanford, and several Ivies. My event was the 800 meters. I ended up attending the University of Florida, largely because of the beautiful weather and a particularly attractive tour guide during my campus visit. Seventeen-year-old boys should not be in charge of major life decisions without parental supervision.

5. My dad loved coaching and taught me how to excel at track. But he had no actual coaching experience—he was a dentist. So he attended clinics and studied different training methodologies. Most importantly, he taught me the importance of discipline, which is crucial in every aspect of my life.

6. I spent two years at UF. I had a terrible hamstring injury at the beginning of my sophomore season, which was a blessing and a curse. It was a curse because I had to sit out the season, but it was also a blessing because it piqued my interest in training, injury prevention, and rehabilitation. I transferred to Michigan State that summer to focus on my academics.

7. Without track, I had much more time on my hands as a “regular” student. I double-majored in Economics and International Relations, and interned in London and Washington DC. I graduated in 2003 ready for a high flying career in Corporate Finance …  or so I thought.

8. I spent six days at Woodstock '99 working in the Camping Department. The concerts were AMAZING, but the event was a disaster and everything you've read and seen is true. On the bright side, I got to see a lot of bands and was given all the free beer, food, and water I could handle.

9. While at Michigan State, I got serious about strength training and put on 40 pounds of muscle. It was awesome to put my body to the test because I wanted to and not because a coach was telling me to. I became a mad scientist learning about all sorts of strength and conditioning workouts.

10. Also around this time, I knocked out two front teeth while jet skiing in South Carolina. The water was really wavy and I probably shouldn't have been riding. But I was young and dumb, plus there were some pretty girls on the beach I wanted to impress. I had to wear one of those flipper things for two years and have had implants ever since.

11. I started my career in corporate finance  at Morningstar in Chicago. I lasted about nine months before realizing it wasn't for me. I wanted to be an entrepreneur. So I moved back to Florida to start a Servpro franchise with my brother.

12. We built the ServPro business to 20+ employees and four franchised territories in just six years before selling it at the end of 2008. Running a company and managing employees at a young age taught me so much about leadership and business. I am forever grateful for this experience.

13. After we sold the business, I spent nine months traveling the world. I saw soccer games in Colombia, Sao Paulo, Germany, and London. I surfed in Brazil and skied in Japan. It was a much needed break after working 80 hours per week for six years.

14. After my trip, I moved to Austin to figure out the next chapter. It was during this year that I realized I wanted to do something that spoke to my soul and made me happy. I kept circling back to fitness. How could I pursue it as a career?

15. While in Austin, a friend suggested I try fitness modeling. I booked a few gigs, but things kicked into another gear during a two-week visit to New York City for a friend's wedding. During that time, I went on castings, booked a few jobs, and realized New York was where I needed to be. I absolutely thrived on the energy of NYC!

MOVING TO THE BIG CITY

16. Fitness modeling was just a small part of who I was and wanted to be. I made NYC home and put my entrepreneur hat on by booking jobs and developing a successful personal training business. Early on, I had a chance encounter with celebrity trainers Harley Pasternak and Gunnar Peterson and was able to pick their brains. When in doubt, find the most successful people in any industry and they will gladly pay it forward if they sense you are serious about learning and also humble in your demeanor. After my first year in New York, I knew I could make a living as a fitness professional.

17. Fitness modeling opened the door for me to write at publications like Men’s Health, Women’s Health, Men’s Fitness, Shape, and others. I would pitch story and content ideas to the higher ups during shoots. It would blow their minds to see I had a whole entrepreneurial side to me. I've written countless articles on everything from the benefits of massage therapy to the best way to sculpt your abs.

18. Around this time, I read Arnold Schwarzenegger’s autobiography and it opened my eyes to how deep a person can go when they believe they have no upper limit. He inspired me to think beyond just being “talent” as he was in his early days as a bodybuilder and actor. He also had a supplement company, wrote training journals, invested in real estate, and went to college— all while training for four to six hours a day and filming a movie.

19. I met my wife Denise at an event for the charity Trekking For Kids in 2011. It was a bit of a set up, though it wasn't until the after-party that we finally had a chance to talk. Either my dance moves won her over or she felt sympathy for them. We hit it off, talked for hours, and I got her phone number. A few days later, we both went on our last first date and the rest is history.

20. I proposed to Denise in Central Park on her birthday ... but only after I made her join me for a sprint workout. It was an especially hot and humid day and she wore her favorite lululemon outfit because she thought I may propose. I don't think she expected the workout, though. She laughingly tackled me in a flower patch—and thankfully we didn't get any bee stings.

21. In 2016, I was one of the featured trainers on the NBC show STRONG, which was executive produced by “Mr. Rocky” himself, Sylvester Stallone.  It was interesting to see how the show was edited since we had cameras and microphones on us, 24/7. I  wish it focused more on the contestant's success stories  and less on the reality and conflict side of things, but I guess that's why they call it Hollywood.

22. I first saw the lululemon Studio Mirror in January of 2018, and knew within 10 seconds that it was a game changer. Four years later, I still feel that way.

23. My favorite class to teach is Arms + Abs. I can use some of my favorite taglines like “Flex ‘em if you got ‘em” and “Here is your first class ticket to six pack city!” I love to keep things fun and lighthearted but also have a solid teaching base and talking points to have our members learn by doing, rather than just being told what to do.

24. The one class I could never teach is Dance. They would just turn into a strength class for your abs with all the laughter my moves would get.

25. My family—Denise and my two children, Athena and Achilles—mean everything to me.

26. I'm a huge classic rock fan, especially Led Zeppelin and Guns N' Roses. My playlist skews from 1965-2000, then falls off a cliff for anything after 2000. I also love hip-hop and rap from the '80s and '90s, which is way better than today. My playlists are all over the place, from Mozart to Smokey Robinson to U2, Jimi Hendrix, and all points in between. I need music to have energy, soul, and meaning, not to mention a good beat and rhythm. I also love Christmas music, especially this time of year. Perry Como on repeat, anyone?!

27. My favorite all-time movie is Top Gun. The sequel isn't far behind. My major “secret” goal in life is to surprise Denise by serenading her with "You've Lost That Loving Feeling" at a big party and have the whole crowd chime in. One day I will make this happen :)

28. I drink five to six cups of coffee per day. But they are full-size mugs, not little cups. I've cut back a bit since the kids are able to sleep through the night now.

29. My 73-year-old mom  has her own lululemon Studio Mirror and is “Mama Ricky” in Michigan. She works out with me once a week because she said she misses me, and then takes a whole bunch of other workouts from our team during the rest of the week.

30. In December 2020, after teaching a full slate of classes on the Mirror, I was coming home in a LYFT. The driver pulled away as I was getting out of the car, and the door snapped back and lobbed off the end of my right hand ring finger. Thankfully they were able to re-attach it with the amazing work from a top hand surgeon. Here's the crazy thing—I never would’ve found that surgeon of not for the lululemon Studio community. My wife put something on social media a few days after the accident and one of our amazing members, Corrine Rachel, reached out and said her husband works with one of the top hand surgeons in the country. I lost about 30 percent of the strength and mobility in my finger, but am forever grateful to Corrine, our trainers and our community for a wonderful get well video they put together for me for Christmas. Our community and team are second to none.

Get the latest health and fitness tips from lululemon Studio’s experts straight to your inbox.
Sign up now
No items found. 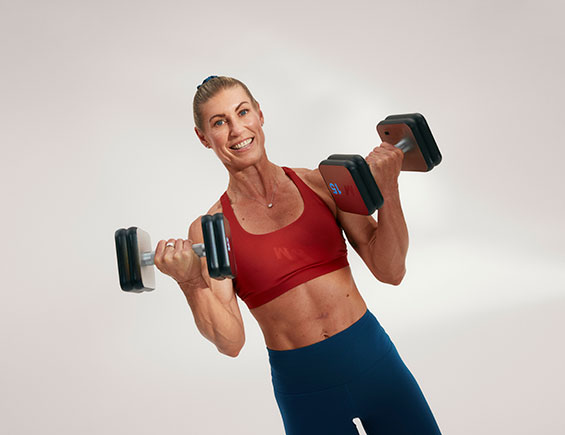 Amanda Baxter: 20 Things You Might Not Know About Me 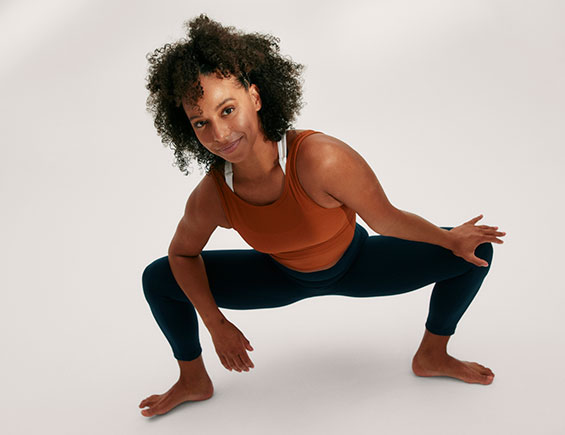 Thank you for joining our list!
Oops! Something went wrong while submitting the form.

Get product updates and news from lululemon Studio  right in your inbox. We won't spam you, promise.